Editorial: Butterfly's Evolutionary chances in a steel cocoon reprinted with permission from Lifestyles Unlimited 1990-2001 A 1990 article, updated
As I reflect back at my previous editorial (for the full version, see "Back Issues"), I come face to face with a term from Physics: Momentum. ".....................Observing world events that consistently touch the sensitive nerve of our outdated energy base, I get the uncanny, yet secure feeling that Nature (Gaia hypothesis) somehow has an inbuilt tendency which implores us to expand our limits. Whether this survival slant towards Evolution is attained by "conscious choice" or by vast and destructive default, each with their unique consequences, appears not to deter in the least, the Gaia "system's" undeviating parameters propelling life forward toward evolutionary (sustainable and balanced) growth.................."
A note on: Darwin, Homo Evolutis, Tabula Rasa (blank Slate) versus Innate, Unconscious Instinct versus Conscious Intent, the evolutionary feedback interplay has always been, and must be, between self and environment, external and internal, one and the many....... As I state on the sidebar, "Statistically, this period of evolutionary feedback interplay is now almost entirely under the control of conscious human intent and will, and far less influenced by unconscious instinct, genetic mutation and natural selection. Conscious intelligence through human intent usurped unconscious instinct, genetic mutation and natural selection as the evolutionary driver somewhere back in caveman days. Science and Technology, Humanity's extended senses, are at the Steering Wheel today. Blind Science and Technology with Corporate secrecy, power, greed and lies, and Humanity can kiss it's x#s goodbye. 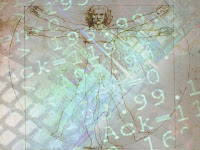 Happy Birthday Darwin; Hello Homo Evolutis
Biotech Entrepreneur Says Human Self-Design May Replace Evolution
Commentary by LISE BUYER
Feb. 11, 2009 —
As we mark Charles Darwin's 200th birthday, a biotech entrepreneur has offered an eye-opening suggestion: that science is bringing us ever-closer to a time when natural selection may yield to human self-design.
In terms of conversation and controversy, we may not have seen anything yet.
The man making this proposal is Juan Enriquez, chairman and CEO of the research and investment firm Biotechonomy. He explained his provocative idea last week at the 2009 Technology, Entertainment, Design Conference in Long Beach, Calif.
To understand it, we begin with a definition. Speciation is the evolutionary process by which new biological species arise. As Darwin effectively demonstrated, this can happen as the genetic makeup of a single species evolves into two or more similar but structurally unique species. Over time, a new species develops attributes so differentiated from those of its ancestors that its genetic code no longer matches its parent. Speciation of this sort is complete when two critters, descended from a single parent, can no longer create offspring with each other. Stated differently, these two can no longer contribute and mix their genes to form a new sprout.
The origin of some speciation is clear in geographic instances, where species that have moved, or reside in regions that have undergone change, genetically adapt to the new terrain. In this case, species add characteristics that help with survival in their remodeled homes and lose those that are no longer useful.
A colorful, if annoying, example is the London Underground Mosquito, first discussed in the scientific literature in 1998. While these insects descended from surface mosquitoes, flying about overhead and sustaining themselves by biting birds, this particular pest has evolved to feed only on underground mammals, including mice, rats and, according to The Times of London, maintenance workers. Scientists have determined that these mosquitoes can no longer reproduce with their above-ground, bird-biting relatives, and thus are a truly new species.
Evolution of this sort, understandable when observing the creature's surroundings, is known as natural selection. However, other genetic changes occur for less observable reasons. These more random generational changes are described as genetic drift.
Multiple Species of Humans?
Now here is where it gets much more interesting. In his talk at TED, Enriquez said the fact that we are the only living species of humans is an anomaly -- or at least out of synch with history. Millions of years ago, there were as many as five different species of humans co-existing on the planet.
Well, hooray! Perhaps modern humans are the end-result of all evolution. Perhaps we have reached the very pinnacle of natural selection and genetic drift. On the other hand, Enriquez suggested, perhaps those are slightly arrogant conclusions.
Until now, scientists have demonstrated that genetic changes in a single species have occurred slowly, over relatively long periods of time. However, in his talk, Enriquez showed photos of human-engineered genetic experiments which have successfully "reprogrammed" one cell into becoming another, completely different cell, added extra wings to chickens, and perhaps most importantly, engineered medical replacements for defective knees, weak tendons and failing critical human organs. Enriquez suggested that these one-off experimental procedures are only the first rung on a most interesting ladder.
Once scientists and medical specialists get the hang of these procedures, which integrate cellular transformation, tissue generation, robotics and more, there's no scientific reason why the learning won't be applied on a greater scale.
Enriquez suggests that we are perhaps just around the corner from a "new and utterly unique species." This species, which he has christened Homo Evolutis, differs from any that preceded it in that it will take "direct and deliberate control over [its own] evolution."
Think about that for a minute: humans that can and will control the evolution of the species. Where is the late Michael Crichton when we need him?
These feats are not possible today -- and that's probably the good news, because there are myriad issues society needs to consider before Homo Evolutis arrives. But make no mistake, work in labs around the world guarantees that in some form or other, at some point in the perhaps-not-too-distant future, she is on her way.
Lise Buyer, a longtime Silicon Valley investor, is a principal at the Class V Group, www.classvgroup.com.
2009 ABC News Internet Ventures

Posted by Eagle Hawk Vision at 12:58 PM No comments: