A Boundless Future is Imminent

reprinted with permission from Sound Off
WHO is choosing the current state of the world in 21st century science?  With no change to our mathematical grasp of reality, but a huge change in our interpretation, world view, perspective, that opens the doors to evolutionary possibilities not even imagined, why is science not pursuing these avenues - ASIDE FROM THE OBVIOUS – YOU CANNOT METER/CHARGE FOR access to infinite energy?

A Boundless Future is Imminent

Sound Off: World Views and The Empowerment Factor There is a dance, of complete entanglement, between evolving world views, and the corresponding wisdom to co-create our future, individually and collectively, worthy of our children and future generations.

We need to raise the question previously asked from Sound Off  post Awesome World View Enhancement, WHO is choosing the current state of the world in 21st century science?  With no change to our mathematical grasp of reality, but a huge change in our interpretation, world view, perspective, that opens the doors to evolutionary possibilities not even imagined, why is science not pursuing these avenues - ASIDE FROM THE OBVIOUS – YOU CANNOT METER/CHARGE FOR access to infinite energy? (see ‘points we know’ previous post)

Posted by Eagle Hawk Vision at 2:48 PM No comments:


Imagine, no change in our mathematical grasp of reality, but a huge change in our world view, perspective, interpretation of Reality; removing the limits of our narrow, limited, “flat world” view of space and time and energy; opening the doors to evolutionary possibilities not even imagined. Makes one wonder, WHO is choosing the current state of the world in 21st century science.
Reprinted with permission from Exploring Energy Evolution http://exploringenergyevolution.blogspot.com/
A few additional perceptual clarifications of space, time, mass, matter, energy, gravity are necessary before engineering and technological applications can proceed with common sense clarity. Mathematics in terms of frequency/energy differential equivalents are required for each factor.

While StarSteps is a far easier read, Russell's perspective from the sphere/cube, light/sound, periodic table/musical note correspondence presents a reality view from another angle.

The Radius of Curvature, the Constant C: the kinetic energy equivalent of the mass energy of matter


For those wondering how to test these concepts using such great energy differentials as the quantity C between reference points, reconsider the state of matter and electrons, and their relationships where this differential potential already exists. (See recap at end of post)

https://www.youtube.com/watch?v=WvCHOBxN-wU
Walter Russell believed that everything is light. This can be linked directly with the equation energy equals mass times the speed of light squared. Light will radiate out in all directions forming a sphere and the three dimensions of our everyday life. All we have to do is place the Lorentz contraction of space and time between the energy and mass. The greater the energy the greater the contraction of space and the slower time will run. Mass will increase relative to this and each ref-frame can be seen as a vortex in space and time.

Walter Russell: Genero-activity begins at the birth of carbon in the first octave with genero-active, inner explosive speed of light which is 186,400 miles per second. It ends with an equal radioactive, outer explosive speed. This speed is the limit at which motion can reproduce itself in curved wave fields before reaching zero where motion and curvature cease.

Walter Russell:Within each cube field is the curved universe of two way light illusion; and beyond, to the farthest reaches of space, is a repetition of illusion from wave field to wave field at the rate of 186,400 miles per second. That is the speed in which every action-reaction anywhere repeats itself everywhere. This illusion of motion gives rise to the belief that light "travels."


Walter Russell:The creation of all forms of matter is an eternal interchange between incandescent spheres and cold cubes. All forms are born in the direction of the coldness of space and are voided in
the direction of incandescence. Thus, the two opposite plus and minus equilibrium conditions are produced which motivate this electric universe of two-way motion, give to it its heartbeat and produce all effects of illusion caused by the interchange of the two conditions of matter.

There is only NOW
Barbara Dewey The Theory of Laminated Spacetime: Electro-magnetic waves are spiralling particles of matter-in-motion or a laminated quantum of spacetime. Each electron is a perfect example, These particles are in a wave-like pattern because they are going through the process of creation and destruction in the blink of Laminated Spacetime. They are surging "up' as they come into existence. They are dying back as they expire. They display "positive" (counterclockwise) and negative (clockwise characteristics because of the twist of the double helix.

The above should offer clearer insights into:


Obtaining Energy by Annihilation of an Electron with a Positron
by Florian Ion Petrescu Bucharest, Romania   http://blog.hasslberger.com/2012/02/particle_annihilation_-_a_sour.html#more 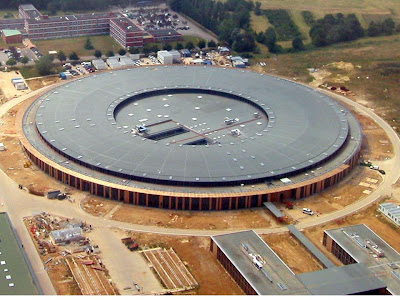 We can obtain renewable, clean, safe, cheap energy by annihilation, for example, of an electron with an anti-electron (positron). An electron and positron are obtained by extracting them from atoms; the extraction consumes a negligible amount of energy. Then, the two particles are brought near one another (collision).

Posted by Eagle Hawk Vision at 6:39 PM No comments: