How to Travel at Warp Speed

Reprinted with permission from Freedom Times:

Freedom Times Projecting Forward on Appleby's "An Impossible World?", Another Submission, Another Rejection Letter From A Publisher:

How to Travel at Warp Speed 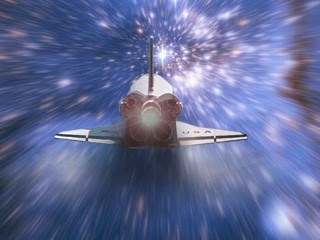 Publisher: We must reject your story outright. Strange, even bizarre works of fiction or highly imaginative sci-fi are very acceptable to our general clientele. However, outright implication of fourth grade, elementary school level science concepts not being taught (i.e., the simplified and expanded version of E=MC2), not grasped, or even considered by high school students, college students, the adult population at large, or the highest levels of academia, the masters of science, is far more nonsense then fiction or sci-fi. (StarSteps-The Radius of Curvature of Natural Law)

Publisher: Furthermore, concepts of warp bubbles, worm holes, shrink space, space-time fabrics are below the level of enjoyment our loony toon readership prefers. What civilizations in the universe that have developed science and technology to the degree in your story, would not comprehend the slightly advanced definitions of space and time, namely degrees of energy differentials? Once the equation E=MC2 is understood, and you write that it was brought to light over a 100 years ago, frames of reference, inertial frames, transformation of co-ordinates, translation relativity should have gone out the door, with the 3D flat space, flat time concepts joining the outdated flat earth concept, and substituted by their equivalent representations, degrees of energy differentials.

Publisher: And more to the furthermore, how could any intelligent species sit for 100 years upon such delusional concepts of: "as an object travels faster and faster, its mass increases," or "As an object approaches the speed of light its mass becomes infinite." The obvious subsequent realization of such a short sighted error swiftly corrects to - the 'increasing mass' of the target is only the measure of the kinetic energy differential which exists between them (specified reference points between which measurements are made - else measurement is meaningless). The mass approaches infinity only as the energy level approaches that of the accelerating force. In the case of the quantity C, usually called the velocity of light (VC), the differential is equal to 3 x 10(10) centimeters per second, or if we convert this velocity to its equivalent energy we would have 9 x 10(20) ergs per gram of mass - further notating a most significant relationship property of light/energy and mass/matter: the VC energy differential is also exactly equal to the total energy inherent in any gram of matter, resulting in the natural outcome, that the quantity C is the radius of the curvature of natural law, simply meaning, that if a differential of energy equal to this quantity exists between the observer and the point which he is observing, the natural laws will be suspended. If the energy differential is in excess of the quantity C, the laws will appear to operate in reverse at that point. Since the velocity of light energy differential can also manifest as a frequency, polarizing gravity becomes possible at the local, here and now, level. (StarSteps)

Publisher: Furthermore, a concluding furthermore, how is it possible that any civilization which has scientifically defined light and its fundamental integrated properties, not understand, by definition, we cannot see faster than the speed of light. The whole ball game automatically evolves to varying (Not Absolute) Relationships of space, time, mass, matter, energy and gravity, where a change to one factor causes changes to the others; making possible faster than light, antigravity, movement from one point to another without going through all points in between, and so on. We must reject your story on the basis that it is not possible for any slightly advanced scientific civilization not to comprehend the basic fundamentals of evolutionary life and energy ....... regardless of one of your religious fables, “you shall have eyes, but not see; you shall have ears but will not hear” - a legendary, but true psychological motto, which does not pass muster, does not pass the reality test, to such a high level of blindness.

As for scientific suppression, conspiracy to prevent awesome weapons use and misuse, please note the critical wisdom tools are automatically comprehended in evolving societies, a natural occurrence in universal life, evolution and survival; wisdom tools which foster profound comprehension and actually become a self deterrent against misuse. Nature itself possesses inherent self preservation tendencies, built in Fail-safes. The understanding required for the development and application of evolutionary advanced energy stages are not possible without integration of the four sciences, Physical, Mental, Social, Spiritual, making advanced energy systems beyond nuclear impossible to misuse with even the barest glimpse of wisdom sciences integrated with the extended principles of E=MC2. Such is the profound effect comprehension brings, as it totally and scientifically, connects all the sciences: Physical, Mental, Social, Spiritual. (http://fadingillusionviarealitycurve.blogspot.com Sunday, December 12, 2004 Blog, "and yet, by secrecy and silence, the death sentence was also sealed")

Appleby's world, "a world where he never had to pay a power bill, where heating and cooling were free of energy costs, where his water was pure and veggies local and fresh, and where a four hour work day allowed him ample spare time to indulge in his writing fantasies. Outside, the air was fresh and the streets clean. Everyone had a job, and in this world-the real world-there were no clandestine powers holding back progress. All received a fair share for their efforts"
An Impossible World? Excerpt from The Energy Solution Revolution by Brian O'Leary http://freedomtimes.blogspot.com/2009/04/impossible-world.html

Credibility for Appleby's world provided by Freedom Times & StarSteps: The Radius of Curvature of all Natural Law principle buried within the equation E=MC2 unified Physics and Metaphysics. In short, the quantity C was the measure of the radius of curvature of natural law. It was the factor enabling us to determine precisely the degree of change in the curvature of one law which is brought about by a specified change in the application of the others (i.e., using the common denominator equivalents of space, time, mass, matter, energy, gravity). Stating that the quantity C is the radius of the curvature of natural law, simply means that if a differential of energy equal to this quantity exists between the observer and the point which he is observing, the natural laws will be suspended. If the energy differential is in excess of the quantity C, the laws will appear to operate in reverse at that point. In effect, an unlimited, multidimensional universe opened, dissolving the light barrier and single pole gravitational limitation, merging science and spiritual dimensions to a unified, as above so below, foundation of previously unimaginable prosperity, abundance, health and well being, opening the gateway, the steps to the stars.

How to Travel at Warp Speed
Physicists Suggest it May Be Theoretically Possible, but Unlikely
OPINION By LEE DYE May 13, 2009 — ABC news